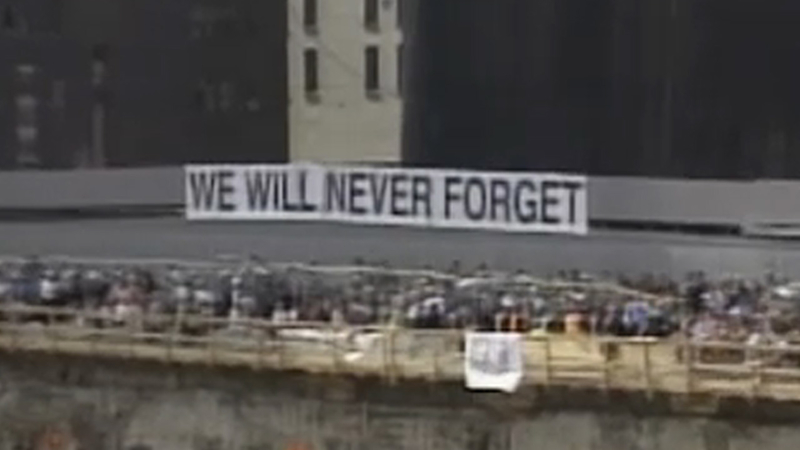 Most people who were alive on 9/11 can tell you where they were and what they were doing when the planes hit the World Trade Center. Twenty years later, Fort Bend ISD teacher Karen Smith is sharing her memories from that day, as she was a teacher and had to reassure her students when she did not know if they would be ok.

When the second plane hit 17 minutes later, she knew the country was under attack.

Here's how the terror attacks unfolded on September 11, 2001.

"That's when my heart dropped," Smith explained. "I thought, 'How am I going to keep a straight face with these kids?'"

Most people who were alive on 9/11 can tell you where they were and what they were doing when the planes hit the World Trade Center. 20 years later, Fort Bend ISD teacher Ashley Joseph is sharing her memories from that day as she was in middle school and feared for her family's safety.

"Seeing the second plane hit and all of us were like, 'Is this really happening? Is it really going on?'" she remembered.

At that moment, teachers didn't have answers. Parents didn't either, but many rushed to school to pick up their kids.

"There was one student that was in the class next to me that they did come that afternoon and pulled him out of class," recalled Smith. "His father was killed in one of the towers. I can't even imagine how that felt, you know? For him and to be at school when that happened. It was dead. It was dead quiet, like when they came in and got him and asked him to step out."

Corey Stewart, a 28-year-old math teacher at the time, would never be the same.

"I think my goal at that moment was to keep everybody calm and keep our students as safe as possible," he said. "I knew immediately in my heart that at some point someone would need to serve for that action."

Stewart joined the Reserve Marine Corps and served for eight years. He even deployed to Iraq and earned the rank of sergeant.

"My goal was that when I'm 80 years old, sitting on a rocking chair in my front yard and my grandchildren come at me with their history books, I can proudly say that when my country needed me the most, I served at that time," he said.

Stewart is now the principal of Dulles High School in Sugar Land.

Most people who were alive on 9/11 can tell you where they were and what they were doing when the planes hit the World Trade Center. Twenty years later, Fort Bend ISD principal Corey Stewart is sharing his memories from that day, as he was a teacher and left his career to serve and protect his country.

Every day, he works with students he hopes will never experience a day like the day he calls the longest day of his life.

"I think my first recognition of September 11th really was kindergarten," said Ashley Poole, who was born in 2004. "You're in school and it's September 11th and they're like, 'We're going to have a longer moment of silence, because we're going to remember September 11th,' but those words don't really register until later on."

Poole said she's felt the impact of that day since she was born, such as long airport security lines.

Most people who were alive on 9/11 can tell you where they were and what they were doing when the planes hit the World Trade Center. Twenty years later, Fort Bend ISD student Ashley Poole, who was born in 2004, is sharing what she knows and understands about the day that changed life forever.

This 17-year-old grew up already knowing phrases like "Never Forget."

"To me, it's a day where we saw the worst of human nature," Poole said. "We saw evil and we saw freedom attacked, and it's an important reminder that freedom is not truly free. That we have to continuously work and be so grateful for the people that serve us every day to help protect our freedoms."

"I do believe, to this day, that everything I did was in a betterment of every student that I've never met before," said Stewart. "I'm still grateful, and I would do it again."