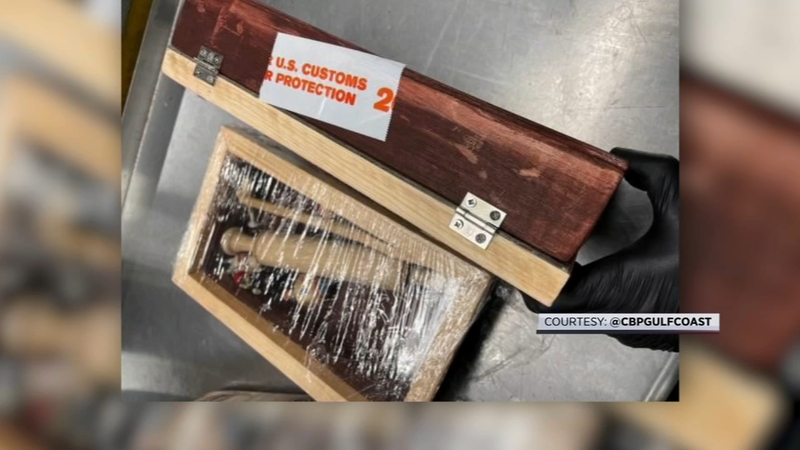 MEMPHIS, Tennessee (KTRK) -- Officers with U.S. Customs and Border Protection found 2.85 kilograms of fentanyl in what the agency called "cute little wooden display boxes" that were headed to Houston.

According to the CBP, officers came across the package in Memphis that was described as "wood crafts art."

Investigators said it was sent from Michoacan, Mexico, to a residence in southeast Houston.

The shipment had unvarnished wooden boxes with hinged lids full of wooden crafts, such as a mini rolling pin.

"An intrusive inspection along the inside linings of the display boxes themselves yielded an off-white powdery substance," read a news release issued by CBP on Friday. "The substance was within gaps created by a double walling of the interior of the boxes."

Lab tests showed the substance was fentanyl, which is similar to the drug morphine but 100 times more potent, according to authorities.
According to the DEA, "drug trafficking organizations typically distribute fentanyl by the kilogram. One kilogram of fentanyl has the potential to kill 500,000 people."

"This might seem like a small seizure from a little handicraft gift box," said acting area port director Benjamin Canfield, "But if we look at those DEA numbers, this had the potential to overdose or kill 1.425 million people. That's a lot of poison to be shipped to a residence in southeast Houston. I'm proud of my officers and the work they do every shift to stop these substances from reaching the wrong hands."

This seizure took place within the Area Port of Memphis, which covers ports of entry throughout the state of Tennessee and falls under CBP's New Orleans Field Office.

This field office includes all ports in Louisiana, Mississippi, Alabama, Arkansas and Tennessee.

Troopers seized 91 lbs. of fentanyl in 2021's first quarter. The new law raises the minimum sentence for the manufacture or delivery of the drug.

The Houston division of DEA says enough drugs have made it through Houston to kill half of the population in the United States.