A family dispute reportedly became a wrong-way chase in a stolen car before a deputy was run over and the suspect was killed.
KTRK
By Charly Edsitty 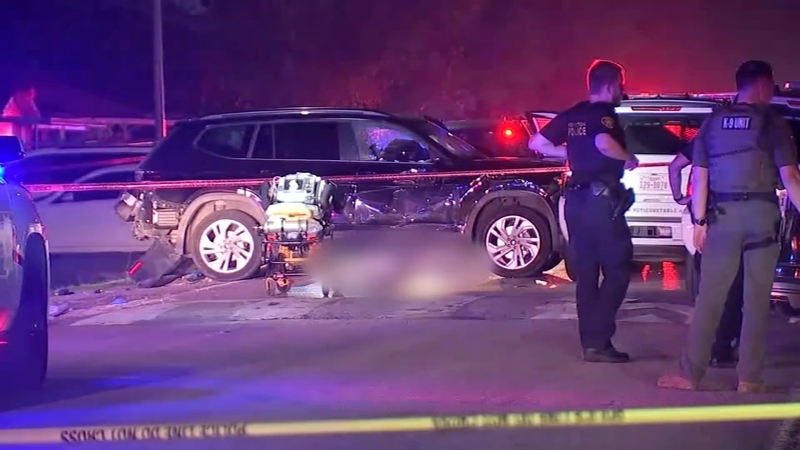 HOUSTON, Texas (KTRK) -- A suspect is dead and a deputy constable is in the hospital after he was run over by that chase suspect in north Houston.

"We have shots fired. Hold the channel. He just ran into the house... Need EMS ASAP. Suspect is going to be down. Suspect is down," emergency responders could be heard reporting on radio calls.

Investigators say the shooting started as a family disturbance at a nearby church on Witcher Lane. The suspect reportedly met up with a family member and some sort of dispute broke out.

The suspect allegedly rammed his car into several others in the parking lot before taking off. Officials noted that the suspect was driving a stolen vehicle, which may have been stolen as recently as Wednesday.

The chase reportedly ended around 10:30 p.m. Wednesday at a house on Mitchell and the Hardy Toll Road.

Investigators say the suspect crashed into the home at the end of the chase. Video from the scene shows a black vehicle crashed into a Precinct 1 patrol car. According to Houston Police Executive Chief Matt Slinkard, the crash left a large hole in the side of the home.

"Very dangerous situation," Slinkard said. "Luckily, no one was hurt inside the home when that suspect ran into the side of the house."

Slinkard said it appears the home is that of a family member, likely the one involved in the dispute earlier in the night.

The chase ended with shots fired by four Pct. 1 deputy constables and one Houston police officer.

Investigators say the suspect also ran over a deputy constable in the process.

The suspect was shot by a Pct. 1 deputy constable and was pronounced dead at the scene, investigators said.

Officials say the deputy constable that was run over is in serious but stable condition. The 34-year-old, who has been with the agency for four years, had procedures done to stabilize his pelvis and spleen.

"Let's pray for him this evening. We have his wife at the hospital," Rosen said. "I'm just so thankful for all of the law enforcement support that we've had this evening for this deputy. Keep him in your prayers. Hopefully he'll pull through and be OK."

Investigators did not immediately release the identity of the suspect killed.

HPD commanders, detectives and PIO are en route to an officer involved shooting in the 1200 blk of Mitchell Rd in north Houston.

Prelim info is felony evading suspect ran over a @HCConstablePct1. Deputy taken to hospital. Suspect was eventually shot. No other info at this time. pic.twitter.com/coSE68A4DW