Couple gravely burned, others lose everything in Pasadena apartment fire 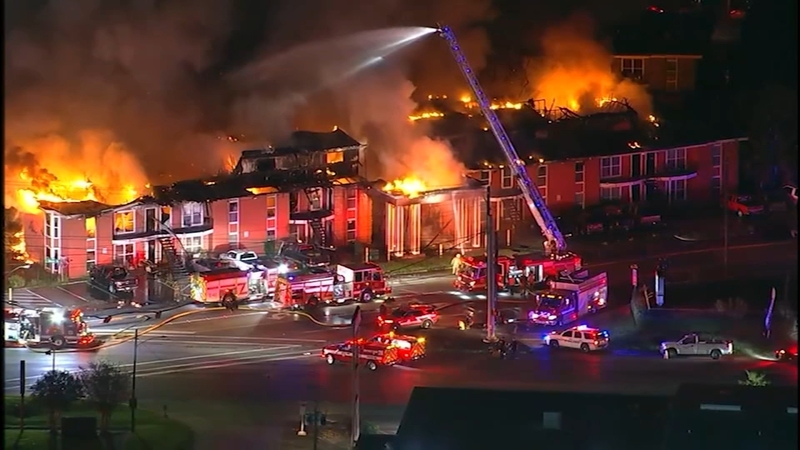 Husband badly burned trying to save wife from fire in Pasadena

PASADENA, Texas (KTRK) -- A massive fire that began inside a downstairs unit of a Pasadena apartment complex has left one couple gravely injured and dozens of residents homeless.

Helpless residents stood across the street as they watched the place they once called home be torn down after a fire Tuesday morning.

The massive fire at the complex at 3635 S Shaver near Allen-Genoa began around 4:15 a.m.

"We're lying in bed and cops knocking on the door, almost knocking it down, talking about getting everyone out 'There's a fire in the building,'" said Carlos Espinosa, who lost everything.

About 16 to 20 units and multiple cars were affected by the flames. By 10 a.m., crews were tearing down the destroyed building, along with the possessions of the tenants.

UPDATE: the difference of a few hours. What started as a 3 alarm fire @ Veranda Village Apts now just a pile of charred debris. Crews are tearing down the destroyed building and with it every possession and memory for the families standing across the street helpless @abc13houston pic.twitter.com/6ReOK5T18X

The wife, identified as Tracy Nichols, was flown to the hospital via LifeFlight in critical condition. Her husband, Saul Rodriguez, was taken by ambulance. Rodriguez suffered burns to the majority of his body while trying to save Nichols, said Brannon.

Brannon also confirmed that Nichols made multiple calls to 911 prior to the fire. Dispatch records show she made at least 20 calls.

ABC13 spoke with Nichols' dad, who said he last spoke with her two days ago and she seemed OK. He also said she does have a history of mental health problems requiring medical treatment.

SkyEye was over the scene of the large fire, with helicopter reporter Don Armstrong noting that the winds were light, allowing crews to knock down the flames from the outside of the building.

Still, daylight revealed the heavy destruction to the complex.

As the sun rises you can see just how bad the damage is to this apartment building in Pasadena. Most of the people I spoke with had to evacuate so quickly some didn’t even have time to grab clothes to put on. Sad scene out here for these families who are helpless at the moment pic.twitter.com/6evhijKM1A

Brannon explained that the building has a common roof, and when fire gets into the attic spaces, "it just runs like a horizontal chimney." The complex was built in the early 1960s, and there were no sprinklers, he said.

At least two others agencies, including the Houston Fire Department, were called to help the Pasadena department.

"I saw people running outside and our neighbor, she's running saying, 'It's burning, it's burning," said Jose Govea, who also lost everything.

Apartment managers said the residents will be relocated to another nearby complex, but several residents say the process was slow with many questions.

@HoustonFire is currently on scene at 3635 S Shaver, after receiving reports of an apartment on fire. Crews report heavy fire on scene. Will update as more information becomes available. Please avoid the area due to heavy emergency traffic. @FireChiefofHFD