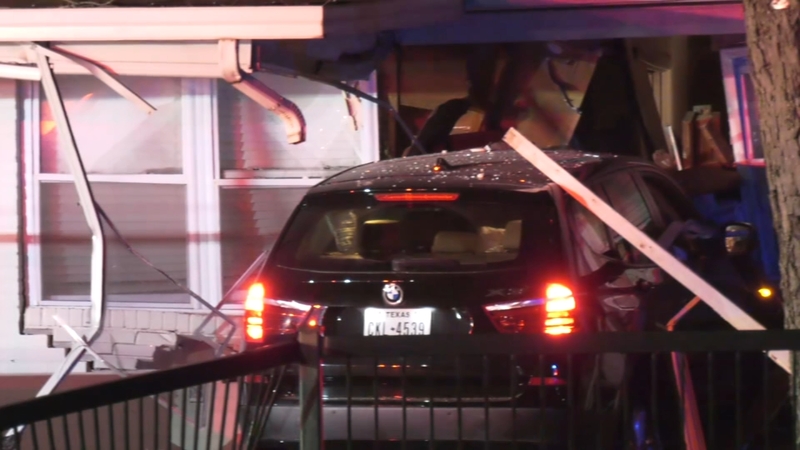 HOUSTON, Texas (KTRK) -- A teen driver crashed into a north side home Wednesday morning after police responded to a report of a suspicious vehicle in the area.

Officers noticed a BMW SUV traveling at a high rate of speed when they responded to the report and attempted to catch up to the vehicle, according to Houston police.

When they turned a corner, they found the SUV they'd spotted had crashed into a residence.

A 17-year-old male was taken into custody at the scene. Nobody was hurt in the crash. Police said the residents inside the home were in another room when the crash happened.

There was no immediate word on if the teen was arrested or if charges would be filed.

It wasn't known if the SUV was the subject of the initial suspicious vehicle report.
Report a correction or typo
Related topics:
houstoncar crasharrestteencar into buildingtraffic accident
Copyright © 2021 KTRK-TV. All Rights Reserved.
CAR INTO BUILDING
Man crashes into W. Houston furniture store after being shot
Suspects crash into Kroger in an attempt to steal ATM, deputies say
Cameras capture chaos as deputy is run over, suspect killed
Pickup crashes into Shenandoah restaurant along North Freeway
TOP STORIES
Boston-bound jet crashes on takeoff west of Houston with 21 on board
Houston executive 1 of 21 on board jet when it crashed in field
How residents in this Harris County neighborhood became numb to crime
Loved ones remember mom of 3 killed during home invasion
Alvin Community College offers way to tap into oil and gas
Friendswood gas fire put out after more than 5 hours since eruption
Aviation weighs in on what might have gone wrong in plane crash
Show More
Jan. 6 panel votes to hold Steve Bannon in contempt
Big warm up ahead but another cool front in the forecast
Astros vs. Red Sox: Houston ties the series after 9-2 win over Boston
Unsolved: A Life Never Lived
Alvin Community College gives inmates way to earn a second chance
More TOP STORIES News