Man barricaded himself and 4 kids in house after shooting wife in argument over beer, HPD says 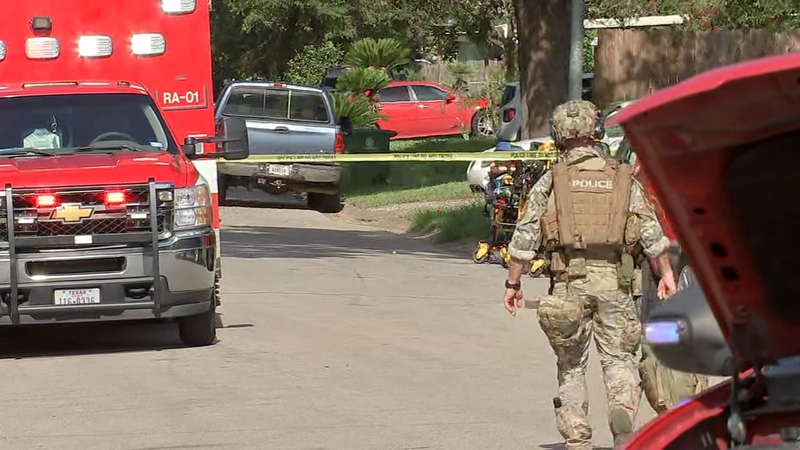 Man barricades himself in home with 4 kids, SWAT officers say

HOUSTON, Texas (KTRK) -- Police have arrested a man who reportedly shot his wife after an argument Saturday afternoon which led to him barricading himself and four children inside his house, authorities said.

SWAT officers with the Houston Police Department responded to the shooting call in the 6300 block of Belmark Street around 4 p.m.

Officials said 33-year-old Raul Garcia and his wife were having a verbal disagreement over a beer.

Once the argument escalated, Garcia's wife reportedly tried to leave the home. As she tried to pull out the driveway, police say Garcia grabbed a pistol and shot at his wife multiple times.

She was hit once in the leg, but managed to jump out of the car, run away and call 911. Officials were able to find her and rush her to the hospital.

After the shooting, Garcia reportedly went back inside the home where his kids were.

Authorities said he didn't want to surrender the kids, who were between the ages of two and 13.

After 30 minutes, HPD Hostage Negotiators said they were able to convince him to come out of the home. According to officials, none of the kids inside were injured.

The standoff at the southeast Houston home ended after four hours, police said.

The wife told police that she and her husband have been together for 16 years, however they have a history of domestic violence.

Court records show Garcia was previously arrested and served three years in jail after a shooting incident involving his neighbor back in 2017.

Police say Garcia was out on a $100 bond during this most recent incident for hitting his wife's car with a brick back in 2020.

Garcia was charged with aggravated assault of a family member and is now in jail without bond.

Our SWAT & Hostage Negotiations Teams are en route to the 6300 blk of Belmark near Mykawa on reports a male suspect shot his wife in the leg. The male is barricaded inside the home with possibly 4 children inside.

The woman was taken to hospital. PIO is also en route. #hounews pic.twitter.com/j53UcibOJR