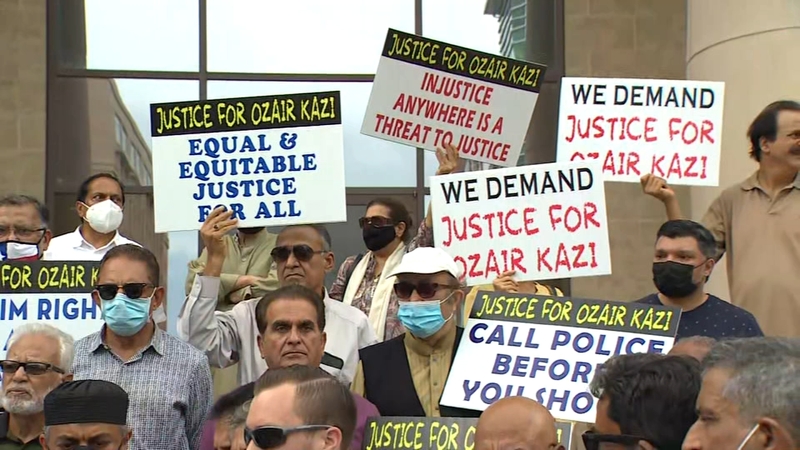 SUGAR LAND, Texas (KTRK) -- A mother and father say they're fighting for justice after a retired Sugar Land police officer allegedly shot and injured their son in their neighborhood last week.

According to family members and community leaders at a press conference Friday, Ozair Kazi was shot last week by the former officer after an argument.

Supporters at the press conference held signs that read, "Call police before you shoot," "Muslim Life Matters," and "Justice for Ozair Kazi."

Authorities said the shooting happened just before 10 p.m. Sunday at the end of a cul-de-sac on Silas Creek Court in the River Park subdivision in Sugar Land.

Investigators say a retired Sugar Land police officer shot his neighbor because he refused to leave his property. So far, no one is facing charges.

Police say Ozair went onto the retired officer's property, as family members said he's done before. When he asked Ozair to leave, he reportedly refused.

That's when investigators say an argument ensued before the men got into a physical altercation. Moments later, the retired officer allegedly shot Ozair.

A community faith leader who spoke at the press conference said the Fort Bend County District Attorney's office has promised an independent investigation will take place.

"Ozair is one of the nicest, sweetest kids you will ever know," another speaker said. "We've known him since he was growing up, really all of his life. We've seen him volunteering at community events, giving his time, giving for others."

Ozair, who was shot in the stomach, has since gone through two surgeries. Family members says doctors are waiting for the bleeding to stop.

Prior to the incident, one neighbor told ABC13 that Ozair rang her door bell and later exhibited unusual behavior.

"This is wrong. One-hundred percent wrong," a community leader said. "Nobody has the right, just because somebody has a gun, to start shooting people."

Others at the conference said the fact there was no arrest made was "not right," and that the shooting has left the Pakistani community devastated.

Ozair's father believes the retired officer was drunk, but said when he asked Sugar Land PD to give him a breath-alcohol test at the scene, they told him 'This is our job, don't tell us what we have to do.'

According to Sugar Land police, the shooter retired from the department several years ago. Police say he stayed at the scene and cooperated with investigators.
Report a correction or typo
Related topics:
sugar landneighborshootingneighborhoodman shot
Copyright © 2021 KTRK-TV. All Rights Reserved.
NEIGHBOR
Amazon van thieves stopped by grandfather who lost granddaughter
Klein ISD officials propose lowest property tax rate in 11 years
Residents call propane storage facility project 'recipe for disaster'
Fifth Ward at odds over proposed center that will help the homeless
TOP STORIES
Boston-bound jet crashes on takeoff west of Houston with 21 on board
Houston executive 1 of 21 on board jet when it crashed in field
How residents in this Harris County neighborhood became numb to crime
Loved ones remember mom of 3 killed during home invasion
Alvin Community College offers way to tap into oil and gas
Friendswood gas fire put out after more than 5 hours since eruption
Aviation weighs in on what might have gone wrong in plane crash
Show More
Jan. 6 panel votes to hold Steve Bannon in contempt
Big warm up ahead but another cool front in the forecast
Astros vs. Red Sox: Houston ties the series after 9-2 win over Boston
Unsolved: A Life Never Lived
Alvin Community College gives inmates way to earn a second chance
More TOP STORIES News