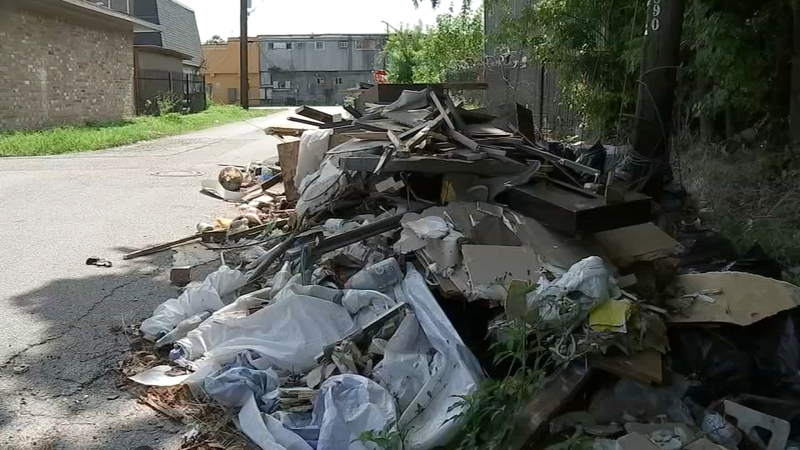 For months, members and visitors have had to see and smell the growing pile of debris just yards from their sanctuary entrance.

The church repeatedly asked the city of Houston to clean it up.

Church members tell ABC13 it's been an on-and-off problem for 10 years, but the pile has been there for months.

She said she was so embarrassed by the huge trash pile, she stopped asking friends to visit. After waiting for months, it took the city 45 minutes to get rid of it.

"I don't want it looking like this," said church member Rosie Thompson. "This is a church. We come and we serve God. We lift up the name of Jesus, so to me, I feel like this is a hazard."

The church has reported the pile several times.

ABC13 read the emails where the city's 311 system catalogued the complaint and then resolved it without coming to clean up the debris.

Then, on Monday afternoon, the city responded to our calls and cleaned up the mess.

The city tells ABC13 they're currently shorthanded, saying it has 37 vacancies they are trying to fill with $3,000 signing bonuses. The city's behind and the same crews that pick up residential trash also pick up illegal debris when they can.

City leaders said calling 311 is the best way to report problems, but officials urge you to be specific when reporting an issue.

Tell the operator exactly what type of trash is dumped, and if you have information about when or how someone is dumping the debris, keep records and call the Houston Police Department to file a report.

"We have a staffing shortage, and so just the ability to stay on schedule has been a challenge for us," said Carolyn Wright, the city's solid waste management division director. "Report it to 311. That's the number one thing. Report it, report it, [and] report it. See something, say something. If there is someone that you see in the act and you can get a license plate number, report that as well."

The trash at Jesus Tabernacle Church is mostly gone now.

The church has since installed cameras hoping to catch whoever's illegally dumping the trash so they can put a stop to it once and for all.