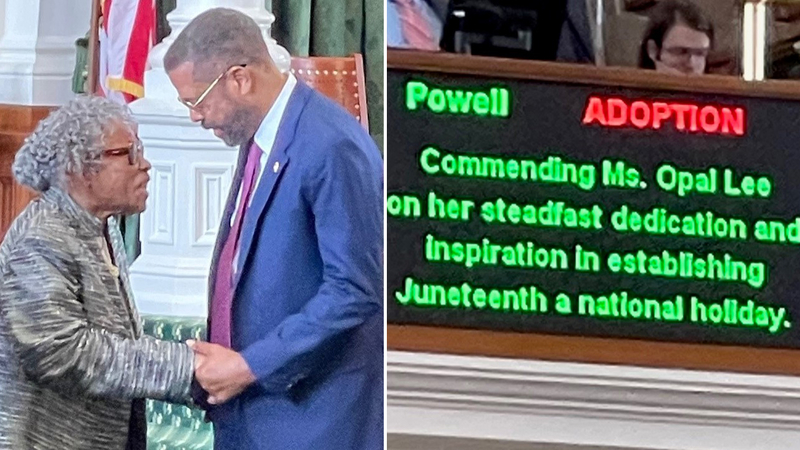 AUSTIN, Texas (KTRK) -- Opal Lee, the 94-year-old Texan known as the grandmother of Juneteenth for her efforts to make the day a federal holiday, was honored by the state's lawmakers.

State Sen. Borris Miles of Houston wrote in a tweet Thursday that it was "a special day" as they honored Lee.

Lee garnered attention nationwide after performing 2.5-mile walks in cities across the country to gain support for the federal Juneteenth holiday.

Her efforts paid off this year when the United States Congress passed the Juneteenth National Independence Day Act designating Juneteenth as a federal holiday. President Joe Biden signed the bill into law on Thursday, June 17.

Juneteenth honors the day in 1865 when Union soldiers brought the news of freedom to enslaved Black people in Galveston, Texas - some 2 1/2 years after President Abraham Lincoln's Emancipation Proclamation had freed slaves in Southern states.

The distance of Lee's walks represent the amount of time slaves didn't know they were free.

Texas Lieutenant Governor Dan Patrick said he is going to recommend that a portrait of Lee be put in up in the Senate chamber.

From "Our America: Black Freedom" in June 2020: Opal Lee is confident that Juneteenth will finally become a national holiday across the country this year.

ABC13 spoke with three Houston leaders in politics, education and community service, who say national recognition of Juneteenth could bring healing not just to the Black community, but to other underserved communities.

The mural covers 5,000 square feet and bursts with vibrant colors. Here's why the 'Absolute Equality' mural on the Strand in Galveston is a must-see.