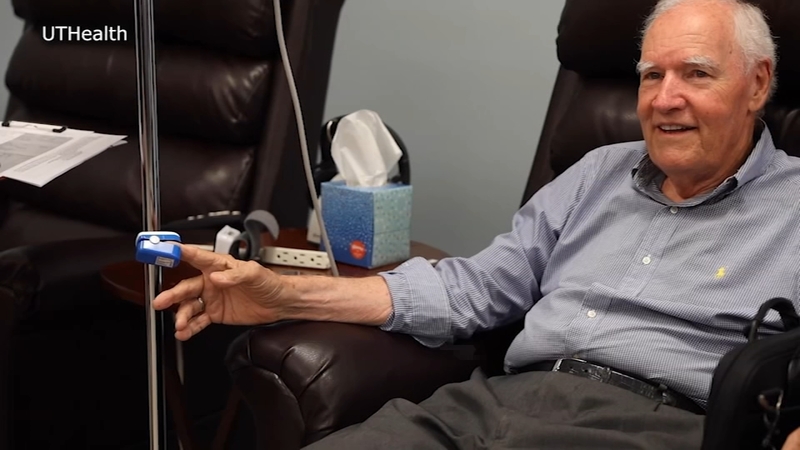 HOUSTON, Texas (KTRK) -- There's a possible breakthrough in the fight against Alzheimer's. A recently-approved infusion therapy, called Aduhelm, is being used to treat the disease and a Houston man is the first in Texas to try it.

"There was a lot of celebration," said 82-year-old Rolfe Johnson.

Johnson recently tried Aduhelm at UTHealth. He was diagnosed with Alzheimer's five years ago and spoke with ABC13 about trying the new treatment.

"I might have been a little frightened, or a little apprehensive, except that I had already been through two trials of other drugs in years past, and so far, as I could tell, they either postponed or held off the effects of my disease or at least were not harmful," he said.

The Food and Drug Administration (FDA) recently approved the new treatment and said it's the first novel therapy approved for Alzheimer's since 2003.

The drug was developed for patients with mild cognitive impairment, not severe dementia, and intended to slow progression of Alzheimer's disease.

"It's the first one that's worked, which is really valuable," said Johnson's doctor at UTHealth Paul Schulz. "It really gives us a lot of hope. It basically changed the rate of decline about 20% to 40% on different parameters. That's a lot. That means people essentially have a couple of extra years of doing better."

He and his wife of more than 60 years, Carol, are hopeful.

"He has really stabilized from where he was when he was first diagnosed and that's a lifestyle we can live with," she said.

10-year-old Fremont-native Joshua is walking to help end Alzheimer's for his grandfather.