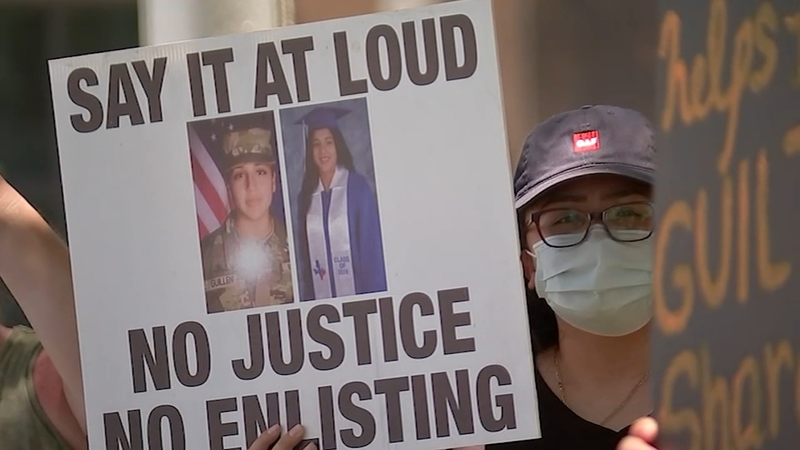 WASHINGTON D.C. -- Female soldiers at Army bases in Texas, Colorado, Kansas and Kentucky face a greater risk of sexual assault and harassment than those at other posts, accounting for more than a third of all active-duty Army women sexually assaulted in 2018, according to a new Rand Corp. study.

The study, released Friday, looked at Army incidents, and found that female soldiers at Fort Hood and Fort Bliss, both in Texas, faced the highest risk, particularly those in combat commands or jobs such as field artillery and engineering. And units with more frequent deployments to war also saw higher risk. Other bases with high risk were Fort Campbell in Kentucky, Fort Carson in Colorado and Fort Riley in Kansas, said the study which reviewed assault data from previous years.

Rand's study provides greater detail on the rates of sexual assault and misconduct across the Army, a chronic problem that military leaders have been struggling to combat. And it comes a year after the killing of Spc. Vanessa Guillén, who was missing at Fort Hood for about two months before her remains were found late last June.

Guillen was killed by a soldier, who her family says sexually harassed her, and who killed himself as police sought to arrest him. Her death put a spotlight on violence and leadership problems within the Army. The Rand report also confirmed one of the Army's conclusions about the impact of command climate, finding a lower risk of sexual misconduct in units with more positive supervisor scores.

The Fort Hood violence prompted an independent review which found that military leaders were not adequately dealing with high rates of sexual assault and harassment at the post. Christopher Swecker, the chairman of the review panel, told Congress that the base leaders were focused on military readiness and completely neglected the sexual assault prevention program. As a result, he said, lower-level unit commanders didn't encourage service members to report assaults, and in many cases were shaming victims.

According to the Rand study, the risk of assault for women at Fort Hood was nearly a third higher than the average risk faced by all women in the Army. Overall, Rand said that the risk across the Army varied widely depending on the female soldiers' base, unit, career field, age, and even whether they were at posts with a higher number of civilians.

Click here to watch Vanessa Guillen's family speak out on the Army's protocols regarding sexual assault allegations one year after her death.

For example, female soldiers in medical or personnel jobs have the lowest risk, while those in field artillery face the highest risk. Field artillery jobs were among some of the last Army combat specialties opened to women - coming in 2015. Other jobs that lagged behind were infantry, armor and special operations.

James A. Helis, director of the Army Resilience Directorate, said the study "sheds light on the environmental and occupational factors that contribute to the risk of sexual assault and sexual harassment for our soldiers and, in turn, will help inform future prevention and response efforts."

The report used earlier Rand studies as well as data from Defense Department anonymous surveys in 2016 and 2018 that seek information about sexual assaults and harassment that may or may not have been formally reported. And it compared that to other military personnel and demographic data.
Soldiers assigned to the Washington, D.C. region, meanwhile, have some of the lowest risk totals, with the Pentagon showing the lowest of all installations listed. Among the bases with the lowest reported risk were Fort Belvoir, in northern Virginia, and Fort George G. Meade and the Walter Reed National Military Medical Center, in Maryland.

According to the study, an estimated 8.4% - or about 1 in 12 - of the roughly 5,883 Army women who served at Fort Hood were sexually assaulted, while at the Pentagon it was 1.8%, or about one in 50. The study noted, however, that the difference is not surprising considering that it's likely that women at the Pentagon are, on average, older, more senior-ranking and more highly educated. They also are more likely to be working with older and more senior-ranking men.

The report said that the data can be used to help the Army tailor prevention and other programs to better counter sexual assault in the ranks.

"These findings provide the Army with increased visibility on where exactly risk is consistently high for sexual assault and sexual harassment," said Jenna Newman, social science advisor at the resilience directorate and the Army's project lead for the study. "It suggests there are location-specific concerns that require targeted interventions into climate and culture and will require additional research to understand."

In the wake of the Guillen killing and a spike in suicides last year, Army leaders launched a program in October that focuses on the wellbeing of soldiers and their families, specifically making people the Army's top priority, overtaking combat readiness and weapons modernization.

And the Sergeant Major of the Army, Michael Grinston, the top enlisted soldier, began a campaign called "This is My Squad" to build unit cohesion and encourage soldiers to look after each other. The broader effort also is aimed at improving the command climate in units, since poor leadership was identified as a significant problem at Fort Hood.

Juan Cruz and Vanessa Guillen's family are still looking for answers as to why the late Army specialist was killed in 2020 and how her murderer escaped justice.