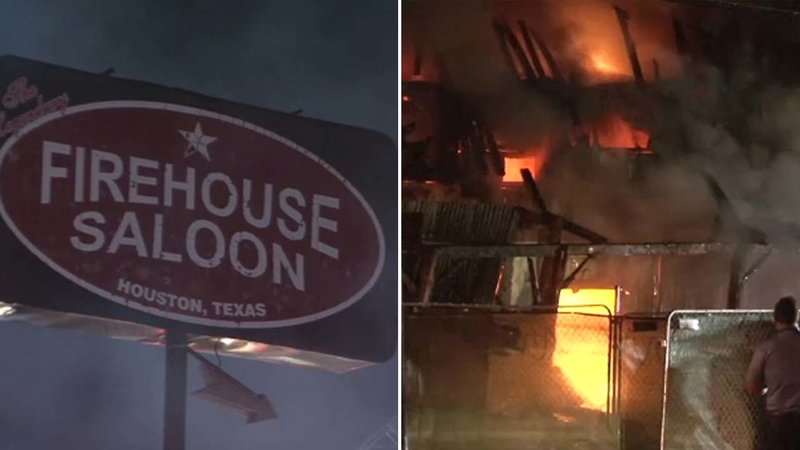 HOUSTON, Texas (KTRK) -- After closing its doors for good at the end of 2020, the legendary honky-tonk Firehouse Saloon almost burned to the ground early Thursday morning in southwest Houston.

The building has been abandoned for some time.

The Houston Fire Department said that it responded to the former saloon located in the 5900 block of Southwest Freeway near Fountain View around 1:45 a.m., after several drivers called 911 to report thick smoke. Firefighters could even see the smoke from their fire station.

District Chief Jason Wells said that when crews arrived, the majority of the building was up in flames. They were able to save a small warehouse on the east side of the empty building, but that structure appeared abandoned as well.

While HFD said that the building was secured and had fencing, it's still unclear at this time how the massive fire started.

Still, it marks another sad chapter for a Houston icon.

ABC13 reported last November that after 28 years, the Firehouse Saloon had closed.

In a Facebook post shared just before Election Day, the venue said that the property owners would be moving forward with redevelopment in the same spot, which has been there near the Galleria area for decades.

Tom Imber, the owner of the Firehouse Saloon, talks about the traditions of the legendary establishment in the wake of a fire that greatly damaged the Houston watering hole.

There's no word on what that means now that there was a fire.

"To all the musicians that made us great: Miranda Lambert, Toby Keith, Blake Shelton, Randy Rogers, Billy Bob Thornton and SO many more - we say thank you!" the message said at the time.

Voted the #1 Honky Tonk in Houston and nominated as music venue of the year in Texas, the saloon didn't just boast country acts.

It also saw rock and pop artists cross its stage. Musicians would often play to packed crowds, pre - COVID-19 times, providing the backdrop for two-stepping on the venue's wooden floors or just colorful conversation among friends sitting at the picnic tables.

Firefighters had owned the venue since 1992.

It also served as a place for private parties and events, including weddings, graduations and fundraisers. Given its status as a multipurpose facility in the heart of the Bayou City, it's likely that many people will remember it fondly.

On Facebook last year, Firehouse said it would be reinventing itself, "so y'all stay tuned. You're going to love what's coming next."

It's been a Houston honky tonk institution for nearly three decades and it could make a return in another location soon, according to the owner.

The pandemic has hit businesses hard, both large chains and small local stores. ABC13's T.J. Parker explains what may be next as the pandemic continues.

GET INFORMED: Explore all the different options business owners have to stay open in the video above.