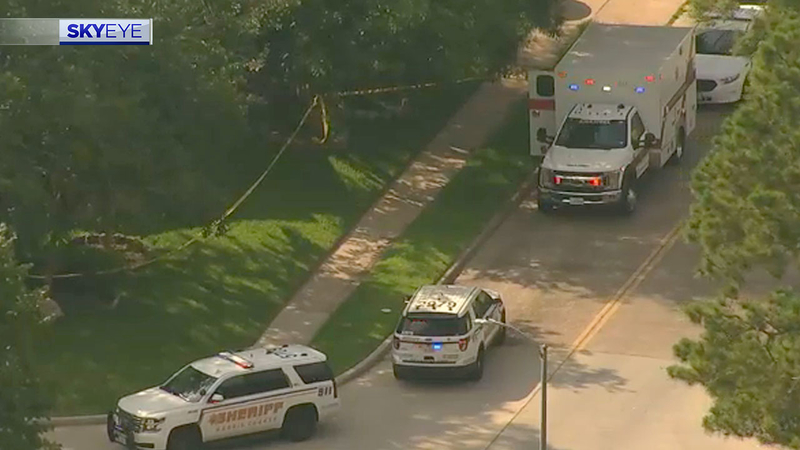 The sheriff's office was called to the 1200 block of Baltic Lane after the 30-year-old woman called 911 and told dispatchers she shot the man in self-defense, according to Homicide Sgt. D. Wolfford.

When deputies arrived, they found the man dead inside the front door of the home. He had multiple gunshot wounds.

@HCSOTexas are investigating what appears to be a domestic violence related shooting at the 1200 blk of Baltic Lane in North Harris County. A male has been confirmed deceased on scene. #HouNews pic.twitter.com/KHLL5wL9qr

The woman, who is 1-month pregnant, was transported to the hospital with injuries Wolfford said were consistent with assault.

Investigators said they don't know what led up to the assault, but plan to question the woman.

Children, ranging in age from approximately 10 to 17 years old, were inside the house at the time and woke up to the sounds of an argument and gunshots.
Report a correction or typo
Related topics:
harris countydeadly shootingfatal shootingshootingdomestic violenceman killed
Copyright © 2021 KTRK-TV. All Rights Reserved.
DOMESTIC VIOLENCE
Man on the run after shooting ex-girlfriend's new boyfriend, sgt. says
Spring Branch man sentenced to 45 years for killing brother-in-law
NYPD officer kills woman after finding her with partner, police say
Sabrina Greenlee speaks out against domestic violence
TOP STORIES
Boston-bound jet crashes on takeoff west of Houston with 21 on board
Houston executive 1 of 21 on board jet when it crashed in field
Police chase comes to end on Houston's east side
Gradual warm up set to return rest of the week
Astros to start less-than-healthy Greinke in Game 4 to salvage ALCS
Man wanted for aunt's murder in Florida arrested in Harris County
New congressional maps OK'd by Texas legislature head to Abbott
Show More
Bail jumping charges filed against DWI suspect in deadly crash
US expected to authorize mix-and-match COVID booster shots
Husband pleads for justice after wife was shot to death over $40
Fallen deputy just returned to work from paternity leave, friend says
Texans release longtime defensive end Whitney Mercilus
More TOP STORIES News