That big US-59/I-610 ramp closure we've been talking about? It's underway 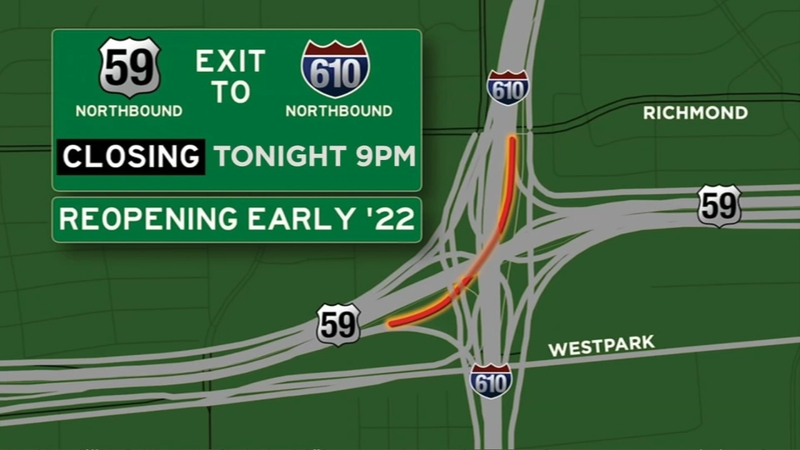 HOUSTON, Texas (KTRK) -- After a couple of delays, it's officially time to brace ourselves for at least six months of a traffic headache.

The ramp connecting I-69/US-59 Southwest Freeway northbound to I-610 West Loop northbound officially shut down at 9 p.m. on Thursday. It's the first of two major closures to happen.

You may remember that a few years ago, the Southwest Freeway that we all know and sometimes love was re-designated as I-69. But it still refers to the same stretch of highway.

Trying to think of your shortcut already? Don't worry! We've got the top detours in the video below.
EMBED More News Videos

It's about to get real near I-610 and the Southwest Freeway, Houston! Don't worry, ABC13 has got the top shortcuts and detours all in one place.


TxDOT says this entire ramp will be closed in mid-summer for approximately six months to make room for the construction of the new ramp. The new connector is expected to be completed early next year.

The closure will affect those in Sugar Land, Stafford and Sharpstown if you're headed into downtown on Friday morning.

To try to get around the traffic, you may want to consider a side street.

You can try taking Westpark Drive or exit Chimney Rock and then head east on Richmond.

In addition, as part of this work, crews will close the Southwest Freeway main lanes in both directions at I-610 West Loop starting Friday at 9 p.m. until Monday, June 14 at 5 a.m.

These are the top five cars lasting longer than 200,000 miles in H-Town. Spoiler alert... three of them are from Toyota!

TxDOT says the contractor has incentives on this work so they stand to receive additional funds for early or on-time completion.