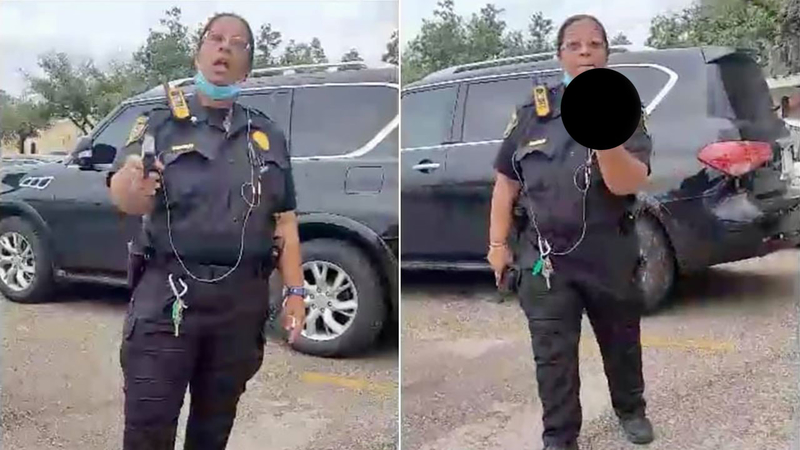 HOUSTON, Texas (KTRK) -- A man seeking help during a dispute over a parking spot at a southwest Houston mall ultimately had a gun pulled on him by a security guard.

Luis Quintero is now suing the security guard, the guard's employer and PlazAmericas mall in the Sharpstown area for an incident that his lawyers claim gave him post-traumatic stress disorder.

On Wednesday, Quintero's attorneys - Randy Sorrels, Alexandra Farias-Sorrels, and Jessica Rodriguez-Wahlquist - disclosed details of their client's lawsuit from the May 22 encounter at the mall located at the Southwest Freeway and Bellaire Boulevard.

According to the attorneys, Quintero and another mall patron were in a dispute over a parking spot. Quintero had been waiting for a spot when the other person swept in to take it.

As the dispute got heated between the two, a nearby security guard, identified by the attorneys as Melissa Marie Jackson, an employee of Allied Universal Security Services, responded.

Quintero claims as he was trying to explain to Jackson what happened, she began yelling obscenities at him and taunting him. It only escalated from there, the lawyers added.

"Jackson became unhinged when Quintero proceeded to ask her if she was an actual Harris County police officer, pulling out her gun, placing her finger on the trigger, and pointing it at Quintero," his attorneys said. "Fearing for his life, Quintero called 911. Law enforcement arrested Ms. Jackson at the scene and charged her with aggravated assault with a deadly weapon."

As part of the claim against the security guard, Quintero's attorneys also released photos said to be taken of Jackson during the encounter. One image shows her holding the gun in her right hand and raising her middle finger of her left hand. She is also seen pointing her firearm in the camera's direction.

While a monetary relief figure was not stated in Quintero's lawsuit, his lawyers said they want "the defendants to properly interview, vet, train and hire qualified security guards."

"It is outrageous that employees and agents of PlazAmericas and Allied would unholster a gun, put their fingers on the trigger and point the loaded gun at families and shoppers who are there to shop at their mall. It is one thing to worry about those criminals who may be out to hurt you, but it is beyond comprehension we have to be genuinely afraid of those who are hired to protect us," Farias-Sorrels said.

Eyewitness News has reached out to the defendants in the case to respond to the lawsuit.

In a statement, PlazAmericas stated the guard isn't associated with the mall or its security provider:

The security officer involved in the altercation at PlazAmericas last week is not affiliated with BK Plazamericas, Ltd. or our security partner, Allied Universal Security Services. While rare, we take assault on our property very seriously, and will fully cooperate with the authorities throughout the investigation, as needed.