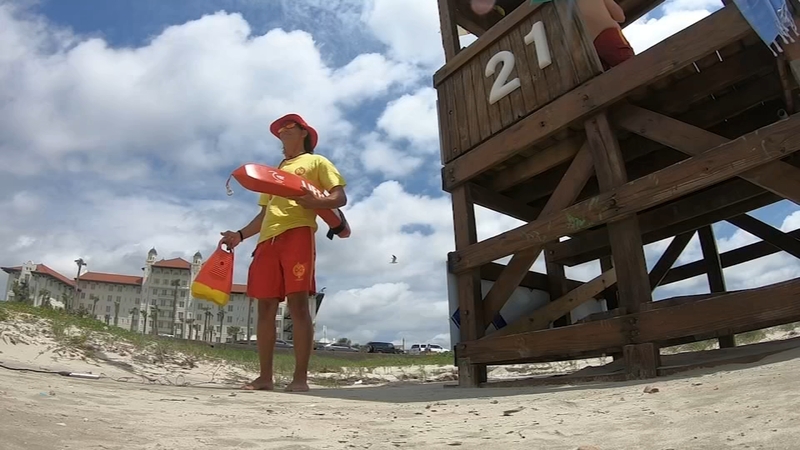 Working as a Galveston Island Beach Patrol lifeguard takes more than watching out for swimmers. You go through more than 100 hours of training. It's a preparation that recent lifeguard academy graduate, Thomas Otten, believes makes the island crew ready for anything.

"This really is the best of the best," Otten said. "It's definitely some of the best, if not, the best agency in the state of Texas."

Otten moved from Austin to the island this summer. That jump got even sweeter because Otten received a raise his first week on the job.

"I didn't know about it until after it passed, actually," Otten recalled. "It was really cool to like, 'Hey it went from this is pretty decent pay to this is really good pay.'"

Days ago, the Galveston Park Board increased starting lifeguard pay from about $12.50 to $14 an hour. The reason is the island needs more lifeguards.

LOOKING FOR LIFEGUARDS: Thomas is a new @IslandLifeguard. Right now, the agency is short about 40 of them. Could bumping their pay attract more? @abc13houston at 5pm, the raise lifeguards just got, and how this could impact your safety this summer. pic.twitter.com/vQOIRri8D3

"We're all sort of struggling to make sure we fill all those lifeguard towers for the summer," Galveston Island Beach Patrol chief, Peter Davis explained.

Davis said the island is short 40 lifeguards. He said the pandemic has impacted the agency from the labor shortage, no junior academy, and few international students. This busy holiday weekend, they were able to post a lifeguard at every tower, but it does impact other safety measures.

"We also have a boat or two in the water that's patrolling," Davis explained. "Lost child detail. Just to find lost kids at the beach parks, we won't be able to do a lot of that stuff."

After increasing pay, beach patrol will host another lifeguard academy next week. As long as you're 16, pass the drug and physical tests, you can join Otten and the other lifeguards this summer. An assignment where you can work on more than just a tan.

"I want to do something that challenges me, but something that's exciting," Otten said. "Where I get to make an impact on people."

To apply for the lifeguard position, visit the Galveston Island Beach Patrol's website.