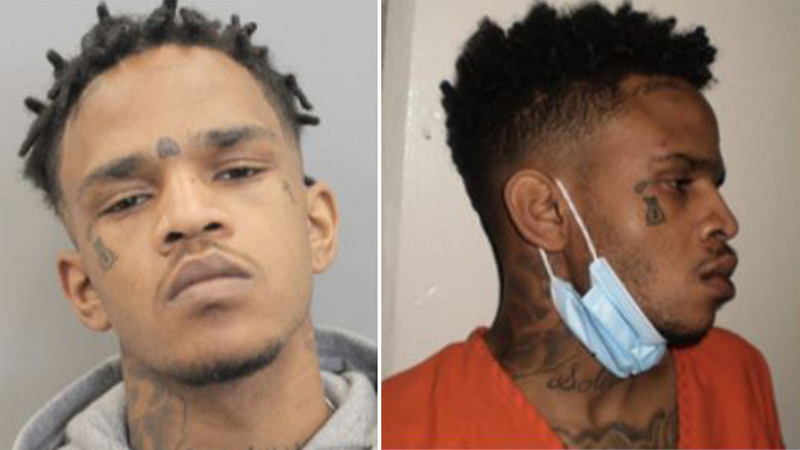 Earlier this year, the sheriff's office launched an investigation into the Feb. 17, 2021, death of a man who was in custody at the county jail. HCSO said 23-year-old Jaquaree Simmons was pronounced dead at a hospital.

Just one day prior to his death, a three-month long investigation found detention officers used physical force with Simmons on three occasions. He was evaluated by medical staff before returning to his cell, where he was found unresponsive the following day.

The events preceding Simmons' death, according to investigators, occurred out of view of the 1,490 security cameras currently operating inside the 1.4-million-square-foot jail complex.

The sheriff's office said investigators conducted 73 interviews of 37 employees and 20 jail detainees. They also reviewed phone records and security video footage, while also analyzing evidence such as round sheets and medical records.

The Harris County Institute of Forensic Sciences ruled that Simmons died from blunt force trauma to the head. Simmons' death happened right in the middle of February's historic winter storm.

"During a natural disaster, we expect to see the very best in our employees," said Gonzalez. "These 11 people betrayed my trust and the trust of our community. They abused their authority. Their conduct toward Mr. Simmons was reprehensible. They showed complete disregard for the safety and well-being of a person they were directly responsible for protecting. They escalated, rather than de-escalated, the situation. Their conduct was unacceptable and inexcusable, and has discredited them, the sheriff's office, and their fellow employees. None of them deserve to wear the Harris County Sheriff's Office patch ever again."

"All six of them are on notice that unless they exhibit immediate and consistent compliance with - and adherence to - all sheriff's office policies, rules and regulations, they will be subjected to the imposition of further disciplinary action, up to and including termination," said Gonzalez.

Meanwhile, new details surrounding Simmons' death and what led up to it were also released.

The sheriff's office said on the morning of Tuesday, Feb. 16, Simmons used his clothes to clog his cell toilet, causing it to overflow.

Detention officers responded to his cell to clean it up. That's when HCSO said force was used against Simmons, however, no employees documented the use of force. Investigators said that's a violation of sheriff's office policy.

Once the cell was cleaned, HCSO said detention officers sent Simmons back with no clothing.

"This was also a violation of policy, which requires detention officers to notify a supervisor before removing a person's clothing and that the person be provided with a smock," read a statement issued by HCSO on Friday.

That night, detention officers stopped by Simmons' cell to deliver a meal.

Investigators said one of the officers filed a written report saying Simmons threw his meal tray at him and "charged at him." That's when the officer punched Simmons in the face, closed the door and left him in his cell.

"Detention officers then called for help, removing Simmons from his cell so that he could be evaluated by medical personnel," said HCSO. "Again, detention officers used force against Simmons as they handcuffed him and escorted him out of the cell block. At this time, Simmons suffered multiple blows to his head."

Investigators said none of the employees who were there for the second use of force documented it at the time, which is also considered a violation.

Later that night, medical staff evaluated Simmons in the clinic. He was reportedly still conscious at the time and had a cut to his left eyebrow and upper lip. At the time, the power was out inside the building due to the storm, so the medical staff ordered an X-ray be taken as soon as possible.

The sheriff's office said Simmons was then returned to his cell for the night, but said staff never took him back to the clinic for the X-rays, even after power was restored.

According to sheriff's office policy and the Texas Commission on Jail Standards requirements, detention officers must conduct visual checks on everyone in the jail every hour.

"During regular circumstances, this is documented electronically," said HCSO. "However, the electronic rounds documentation system was not used during the power outage, which forced all staff to use handwritten round sheets."

Investigators said that process wasn't followed in the cell pod where Simmons was being housed.

In fact, they said they found no documentation of "completed rounds" in the area from the morning of Feb. 15 until noon of Feb. 17, just a few minutes before Simmons was found unresponsive in his cell around noon when his lunch was delivered.

"While the specific policy violations varied from one employee to the next, they include use of excessive force, failure to document use of force, failure to intervene, and making false statements to investigators," said HCSO. "Some also violated procedures related to proper monitoring of the physical welfare of people in the jail."

The following employees were fired in connection with this investigation:

The following employees were suspended:

"The treatment of Jaquaree Simmons was both inhumane and unconstitutional. It reflects a bigger crisis in our criminal justice system when our most vulnerable commit a crime and are treated as second-class citizens instead of protected. The Simmons family is grateful for Sheriff Gonzalez's action in holding the individuals responsible for Jaquaree Simmons death. Our office will work to make sure these individuals will be held accountable civilly and criminally and we will fight to address and reform the policies and practices that foster and environment of regular abuse."

The Houston Police Department's criminal investigation is also looking into Simmons' death and findings will be given to the Harris County District Attorney's Office to determine whether criminal charges are warranted.