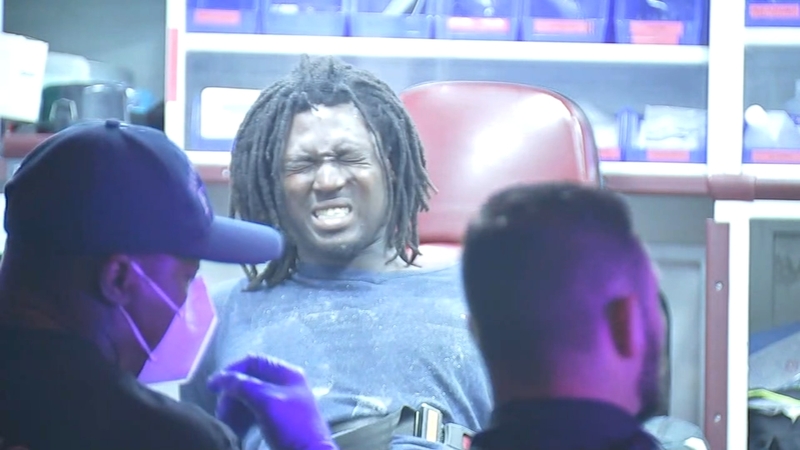 Man busts through 2 motel walls in attempt to escape police

HOUSTON, Texas (KTRK) -- A mother and her baby were woken up in the middle of the night to a man tearing into their room through the sheetrock in northeast Houston.

The suspect busted through the walls of two motel rooms trying to get away from police, according to investigators.

Houston police say he used a pipe and his bare hands to rip down the sheetrock.

It didn't work. After officers caught up with him, he tried to hide in a bathroom, according to HPD.

A police dog pulled him out of the bathroom. Video from the scene shows the suspect grimacing in the back of an ambulance. Police say the K9 bit him.

The incident started around 11:30 p.m. Wednesday at the Hollywood Inn on the Eastex Freeway near Weaver Street, according to police.

The suspect was staying in a room on the second floor of the motel and his ex-girlfriend and her new boyfriend were staying on the first floor, investigators say.

Police say he went down to the first floor and threatened the couple with a pipe. That's when they called police.

When officers arrived, the suspect was already back upstairs in his room.

Police discovered the man already had a couple of warrants. They tried to arrest him, and that's when he started clawing his way into the neighboring room.

"He rips through the sheetrock, goes into the next door hotel where there's an adult female and a young baby girl, scares them to death," Lt. R. Willkens said. "Luckily, he doesn't harm them. They stay in there for a little while scared. As he's in there, he starts ripping to go to the next hotel room, where he eventually ends up."

Police say there's a lot of damage to the motel, and at one point he even tried to escape through the roof.

Lt. Willkens said as the suspect was getting arrested he told police, "Sometimes officers quit looking for me."

The two warrants he had on his record were, in fact, for evading police. He is now also facing a charge for terroristic threat.