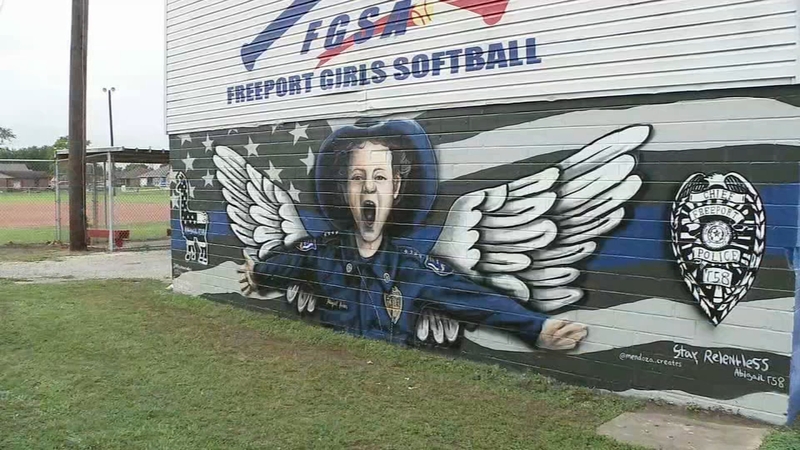 FREEPORT, Texas (KTRK) -- The family of a little girl from Freeport who touched many hearts got an emotional surprise Wednesday.

Abigail Arias captured attention when she became an honorary Freeport Police Officer. She said she wanted to fight the bad guys, and her rare cancer.

Sadly, she passed away almost two years ago.

Wednesday, a Houston artist who never met Abigail, but followed her story, unveiled a wall mural in the City of Freeport, alongside the Freeport police chief, and surprised her family.

It was an emotional moment for her parents and brother.

Her father was full of emotion as the mural for his daughter was unveiled.

Houston artist Floyd Mendoza touched base with Freeport Police Chief Raymond Garivey, and said he wanted to do this for her family and the community.

If you remember, Abigail touched many hearts as she fought to beat a rare cancer.

The Freeport chief was so touched by her spirit, he made her an honorary police officer. She sadly passed away in November of 2019.

Moments like this are what the family said keeps pushing them forward.

"It helps in the healing process. But you know what, it's still difficult," Abigail's father said. "We keep our faith in God and we thank God for giving us eternity in Heaven. And we know that one day we'll be with her again."

Her father said the unveiling was a full circle moment for him. The mural is actually in the same community where his family lived when he grew up.

You can see the mural for yourself at the Stephen F Austin Girls Softball Park, located at 1300 N Ave M.

The chief said that the artist was so moved, he was actually brought to tears himself after completing the mural, which will now live in the community forever.