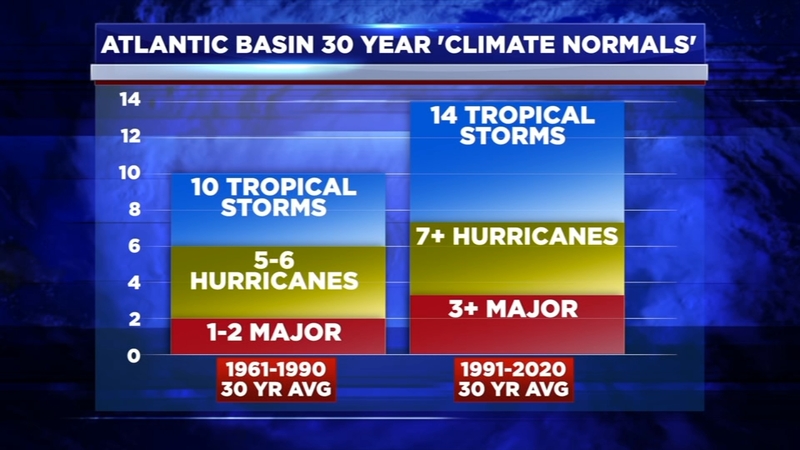 In recent decades, we've observed tropical storms and hurricanes forming earlier, in greater numbers and with stronger winds. That has the National Hurricane Center officials rethinking some of the ways they operate in 2021.

RELATED: What can we expect for the 2021 Atlantic hurricane season?

The official start of hurricane season is June 1. This year, the National Hurricane Center will begin its forecast operations earlier.

They'll start May 15 alerting us to any possible tropical storms that could develop within five days.

Named storms have formed before June 1 for six years straight now. A panel of hurricane experts is working to determine if the entire season should be moved earlier to start in May.

There are also more tropical storms and hurricanes forming over the entire season.

The National Hurricane Center uses 30-year averages to determine what is a "normal" number of storms per year.

From 1961-1990, that averaged out to 10 tropical storms, of which five to six became hurricanes, and one or two became major hurricanes.

Those numbers were basically unchanged from 1971-2000. Then they started to climb from 1981-2010. With the record-breaking 2020 season, the new normals from 1991-2020 have increased yet again to 14 named storms, of which at least seven became hurricanes. At least three became major hurricanes.

A recent study from NOAA concludes that warmer sea surface temperatures are likely fueling more powerful hurricanes. 90% of the excess heat trapped by greenhouse gases in the atmosphere is stored in the oceans. When you look at the amount of heat stored in the oceans since 1970, it's only been moving in one direction -- up.
Finally, we're ditching the Greek alphabet.

In hyperactive years like 2005 and 2020, we ran out of hurricane names and moved on to the Greek alphabet.

It turns out it really is all Greek to us. New in 2021, there will be an alternate list of names we're all more familiar with, like Will, Sophie, Nolan and Deshawn.

Hopefully, we won't have to tap into that alternate list in 2021, but no matter how many storms form, we always encourage everyone to prepare the same because we know it only takes one to make it a bad hurricane season for us.

We'll help you do just that in our annual hurricane special that will debut on ABC13 in early June.

America's new normal: A degree hotter than two decades ago