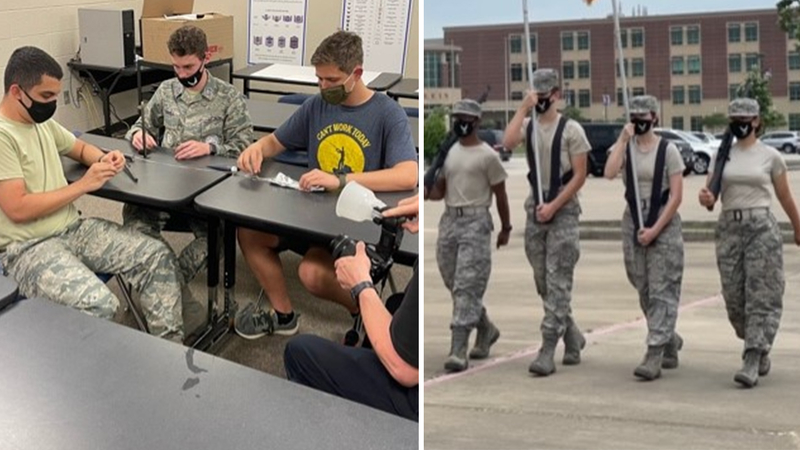 According to the release, units chosen for the Space Force JROTC conversion needed to be in good standing, close to space facilities and be top performers. Klein High School's Air Force JROTC is one of 10 units in the U.S. to be selected for conversion to the newest branch of the armed services, the U.S. Space Force.

"It is definitely an honor to be chosen to be one of 10 inaugural Space Force JROTC units," said Lt. Colonel Timothy Lambert, senior aerospace science instructor, in a statement. "This shows that our cadets have represented the Air Force in such an outstanding manner that they entrust them to represent the new Space Force in the same way."

In celebration of this accomplishment, a ceremonial ribbon-cutting will be held this fall.

"We see this as an opportunity to get our students more exposure, and also to enhance or establish more formal relationships with space-related agencies, such as the Johnson Space Center," Lambert said.

The announcement came just a few months after Space Force celebrated its first birthday back in December.

"It is definitely an honor to be chosen to be one of 10 inaugural Space Force JROTC units," said Lt. Colonel Timothy Lambert in a statement.

Space Force is the newest formed branch of the military. It used to be under the Air Force, but then under the Trump administration, it was made into its own entity.

Space Force focuses on issues like cyber security and keeping our satellites up and running out in space. It also focuses on monitoring the integrity of our cellphone communication, making sure that is not hacked.
It's an opportunity for Klein High School students to learn more about our military.

"So we're the only one in the state, one of 10 in the nation that has been selected. It's pretty cool," Lambert said. "It leaves a little bit of anxiety sometimes because, what did we get ourselves into? What's that going to put on our shoulders? Our cadets have always performed really good. It gives us another target, I guess, to really achieve what is expected of us now."


Klein High School will join other schools from places like Las Vegas, Phoenix and Arlington, Virginia, in making history as the first JROTC programs to make this transition.

A portion of this content was provided by our partners at Community Impact Newspaper.