Houston's iconic 'Be Someone' graffiti returns to overpass after months 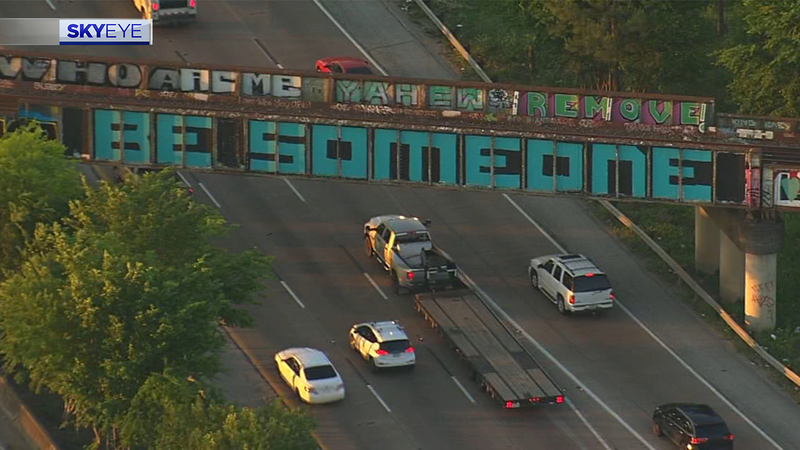 Iconic 'Be Someone' returns to overpass after months

HOUSTON, Texas (KTRK) -- It's back! Months after being painted over, Houston's iconic "Be Someone" display has returned to its familiar spot.

The famous graffiti was spotted Wednesday morning on the railroad bridge over I-10 and I-45 north of downtown.

The sign was painted over when the coronavirus pandemic first began in March 2020 to say "Wash Ur Hands."

With coronavirus fears sweeping the nation, someone has an important message to share with Houstonians.

The sign briefly returned to its original state before it was changed again to say "George Floyd" in June 2020 after the Houston-native was murdered by police officer Derek Chauvin in Minneapolis, Minnesota during an arrest.

If you look closely, you can see 'George Floyd' written in gray over the 'Be Someone' in blue.

After that, the sign was changed to read "#SaveOurChildren" in August 2020. The phrase began as a noble awareness campaign to combat human trafficking, but was thrust into controversy by conspiracy theorists who allege that children are being abducted in large numbers to supply a child trafficking ring.

A group of people holding painting supplies were seen on the bridge posing for pictures after the well-known artwork was replaced early Sunday.

Finally, ahead of the 2020 Presidential Election, the sign was painted over with the phrase "Vote or Die."

The well-known overpass artwork is gone again. This time, it's been replaced with a political phrase.

Since then, the Houston landmark had not been restored to its original state.

RELATED: 'Be Someone' artist speaks about famous statement

Artist behind "Be Someone" sign speaks about famous statement.