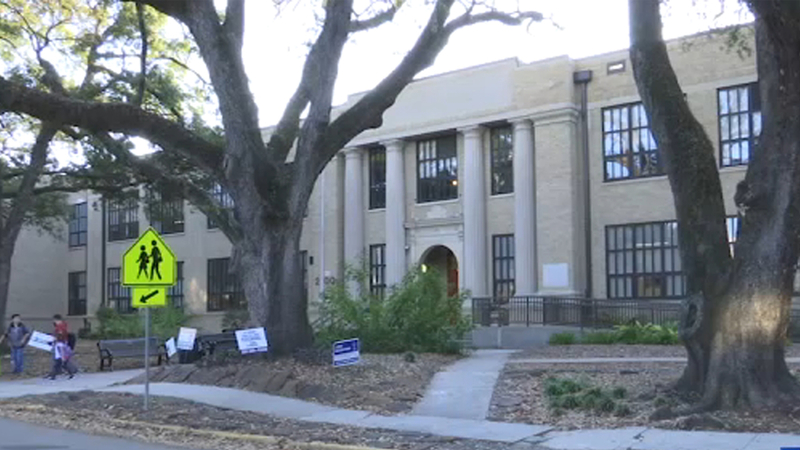 HOUSTON, Texas (KTRK) -- The Houston ISD Board of Education voted unanimously to change the name of one of its Montessori schools in honor of an African American activist.

During Thursday night's meeting, supporters of the change included counselor Belva Parrish, who said she was shocked about what she learned about Wilson.

"When I researched Woodrow Wilson, what I learned blew me away. He prevented the enrollment of Black students at Princeton," Parrish began. "He wrote 'A History of the American People,' where he presented a romanticized view of the Confederacy and described Ku Klux Klan members roving knights errant, who protected the South."

Wilson's history is the reason Princeton removed his name from its School of Public and International Affairs and a residential college in June 2020 in the wake of George Floyd's death.

"We have taken this extraordinary step because we believe that Wilson's racist thinking and policies make him an inappropriate namesake for a school whose scholars, students, and alumni must be firmly committed to combatting the scourge of racism in all its forms," Princeton said in a release published on June 27.

Wilson served as both a faculty member and president of the university, which also noted his achievements and that many do rank him among the nation's greatest leaders.

Still, HISD said the renaming is "an effort to align the school with the inclusive values of HISD."

Activist Ella J. Baker was selected as the new namesake of the school for her work on racial equality and fighting sexism in the civil rights movement for more than 50 years.

Baker played an integral role in some of the civil rights movement's most influential organizations, including the NAACP, the Southern Christian Leadership Conference, led by Dr. Martin Luther King, Jr. and the Student Nonviolent Coordinating Committee.

According to Baker's website, she also co-founded In Friendship, a group whose aim was to raise money to fight against Jim Crow Laws in the Deep South.

Those who favor the change said the Montessori school has long been a place where social justice is at the forefront.

Woodrow Wilson Montessori sits in the Montrose area, one of Houston's most diverse communities.

Statistics from U.S. News show that about 600 students attend the school. It's minority enrollment is 61%.

The school is led by Shameika Sykes-Salvador, who became principal of Wilson Montessori in 2018.