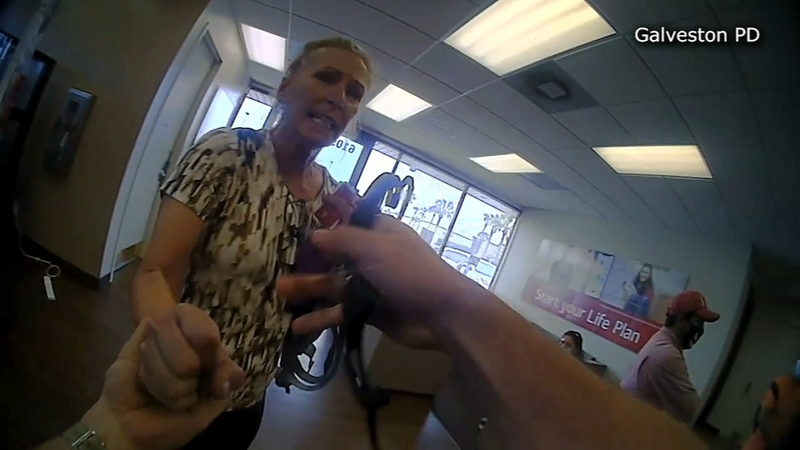 TEXAS CITY, Texas (KTRK) -- A woman accused of resisting a Galveston police officer earlier this month after being asked to leave a bank over her refusal to wear a face mask has been arrested again.

Terry Lynn Wright, 65, was taken into custody Wednesday by Texas City police at an Office Depot, just six days after her arrest on criminal trespass and resisting charges.

Police were called to the Office Depot in the 9500 block of Emmett F. Lowry Expressway just after 9 a.m. after Wright was asked to leave the store by employees for refusing to cover her face, according to a statement from Texas City police.

The footage begins with an officer being directed by a bank manager to Wright, who expressed frustration over being told to wear a mask, invoking the state's lifted mandate.

The officer is heard reminding Wright that businesses can refuse service to anyone that does not comply with masking policies, which is something that Gov. Greg Abbott still allowed.

After Wright said she wanted to take her money out of the bank, the officer told her to go get a mask and come back to do so.

As Wright pushed back at the officer's instructions, he said, "Ma'am, listen, we can do this the easy way or the hard way."

"What are you going to do? Arrest me?" she asks. "That's hilarious."

The confrontation escalated and became physical before Wright was arrested.

She sustained minor injuries and was taken to a nearby hospital for treatment.

In an interview Friday with Eyewitness News, Wright said she traveled to Galveston in an RV to cross off items off her bucket list. She was at the bank to close her account and the Central City location was the only one that was open to her.

She said she would have preferred to go through a drive-thru but couldn't with her RV. Still, she says, she's glad she stood her ground, adding that she is "very opposed" to masks and doesn't believe in the pandemic.

Press play to watch a FaceTime interview with Terry White, the woman who was taken down by security after she refused to comply with the bank's face mask protocol.

Bank of America declined to comment on the arrest. They released the following statement of their policies:

"We remain focused on supporting the health and safety needs of our associates, clients and communities. This includes ensuring our practices and policies are aligned with the most up-to-date guidance from medical professionals and public health experts. The Centers for Disease Control and Prevention (CDC) and other medical experts continue to reinforce the importance of using face coverings and practicing physical distancing in all public spaces. In accordance with that ongoing guidance, we continue to require everyone who enters our financial centers wear a face covering. If clients inform us that they are uncomfortable wearing a face covering or unable to do so, we recommend they use our ATMs or drive-through window. Clients also can utilize mobile and online banking for the majority of their day-to-day banking needs."

The video above is from a previous story.
SEE RELATED STORIES:

CDC recommends kids keep masks on at school this year