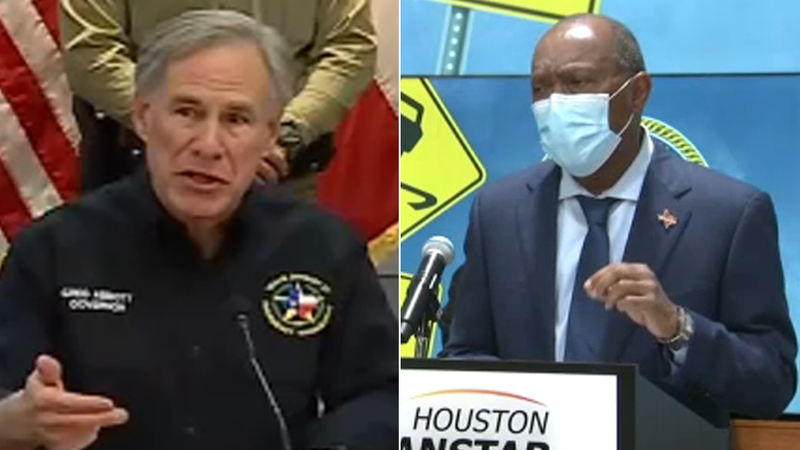 Mayor Turner asked about reaching out to Gov. Abbott

AUSTIN, Texas -- Gov. Greg Abbott said Friday afternoon that the state has four immediate priorities in responding to the crisis caused by this week's winter storm: restoring power to Texas homes, restoring water, ensuring Texans have necessary food and supplies and getting oil refineries up and running.

When it comes to his top priority -- power -- Abbott said there are no longer any residential outages due to lack of generation. But 165,000 households remain without power due to downed lines or the need for the power company to manually reconnect residents to the system, according to the governor.

Regarding water, Abbott said the state is focused on accelerating clean-water testing so that water can return to homes as soon as possible. The Texas Commission on Environmental Quality will begin operating a phone bank at 5 p.m. that will connect overloaded local facilities with other labs that can test their water more quickly, Abbott said.

Abbott also pointed to "what may be the largest challenge in the next week" for Texans: busted water pipes. To that end, the state has been working to grow the ranks of available, and as of noon today, over 320 had renewed their license, Abbott told reporters. The state plumbing board is also coordinating with out-of-state companies to bring more plumbers to Texas.

Nim Kidd, the chief of the Texas Division of Emergency Management, said the state has delivered about 1.7 million bottles of water to Texans - by aircraft, because the roads remain slippery. The shipments will continue "as long as it takes," Kidd said.

When it comes to food and supplies, Abbott said he is prioritizing transportation by allowing the use of off-road diesel on Texas roads. He also said he is seeking a federal waiver that would permit all types of diesel on the state's roads.

At the news conference, Abbott continued to lay blame on the state's electric grid operator for making misleading assurances that it was able to handle peak winter conditions. A few hours before Abbott spoke, the Texas Democratic Party held a news conference during which some of the party's biggest names identified a different cause: decades of GOP leadership in Texas.

"None of this had to happen," said U.S. Rep. Joaquin Castro, D-San Antonio. "The reason that it happened is that [under] Gov. Abbott, the state's Republican leadership ... there's been an utter lack of preparation and a neglect of the state's power system."

Added U.S. Rep. Marc Veasey, D-Fort Worth: "It's Republicans that are to blame for this. Their lack of oversight, their lack of taking a multifaceted approach in diversifying our energy sector, led to this crisis."