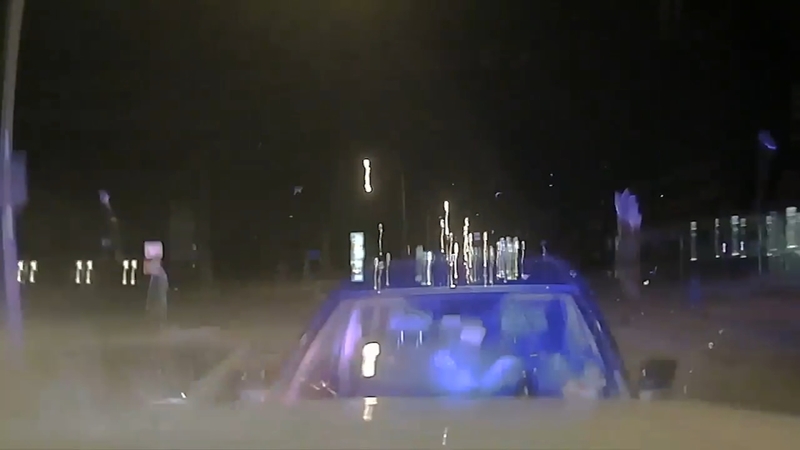 DEER PARK, Texas -- Authorities in Deer Park are using a head-on crash from 2017 involving a police cruiser as a serious message to combat drunk driving.

In a message posted to Facebook Sunday, Deer Park police showed video of the crash between a wrong-way driver and a police cruiser from Dec. 16, 2017.

In the 25-second video, officer Anthony Baggett is seen using lights, his siren and a spotlight in an attempt to get the other driver's attention before the crash on Center Street.

Other vehicles could be seen avoiding the wrong-way driver before the crash happened. The officer involved, identified as Anthony Baggett, calls for help immediately after impact.

"Fortunately, Officer Baggett wasn't killed or seriously injured by the drunk driver traveling the wrong direction on Center Street in this head-on collision," Deer Park police said in the Facebook post. "There was significant property damage to both our police Tahoe and the suspect's vehicle, however, unlike smashed people, they can be easily repaired or replaced."

The department used the incident to highlight the dangers of drinking and driving.

"Please remember today during the BIG GAME (and any other day, for that matter) you can score your own touchdown by calling a friend, a taxi, ride-share, Uber, Lyft, or your mother! Just make sure that you DO NOT DRINK and DRIVE!"

Editor's note: An earlier version of this story incorrectly noted that the crash happened overnight on Feb. 6. ABC13 regrets the error.

Baggett suffered minor injuries in the crash, while the driver was taken to a hospital for treatment and released. Investigators said the driver was later arrested and charged with DWI.