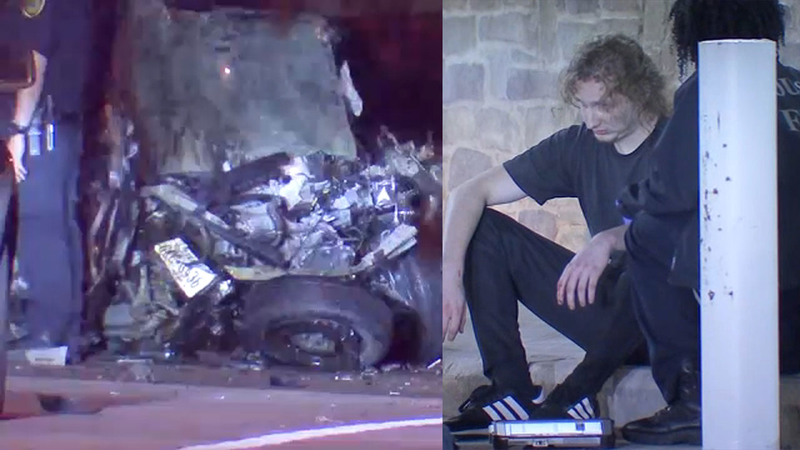 HOUSTON, Texas (KTRK) -- One person is dead after a fiery wrong-way crash involving a possible drunk driver in southwest Houston.

The crash happened on South Main and Hiram Clarke around 2 a.m.

Authorities said a 19-year-old was driving the wrong way southbound on Highway 90 when he crashed head-on into another driver, causing the vehicles to catch fire. The driver of the other vehicle died in the burning car.

HPD investigating a fatal wrong way accident on Highway 90. A person of interest located at a nearby convenience store. pic.twitter.com/mlh7dP9SuW

The suspect was able to get out, but tried to leave the scene and get into someone else's car, authorities said.

The 19-year-old was taken into custody and failed sobriety tests, according to Sean Teare with the Harris County District Attorney's Office.

Teare said the suspect told officers he had been drinking at a club in downtown Houston. He is facing charges of intoxication manslaughter and failure to stop and render aid. Employees of the club could also face charges.

RELATED: Here are the Texas DWI penalties if you're caught drinking and driving

"This is one of the most selfish crimes out there, getting behind the wheel intoxicated," Teare said. "It's disheartening. It should be a wake up call to the entire community. We've got to stop this."
Report a correction or typo
Related topics:
houstontraffic fatalitiesdrunk driving deathwrong waycar firedwicrash
Copyright © 2021 KTRK-TV. All Rights Reserved.
TOP STORIES
Amber Alert issued for 6-year-old kidnapped in Pearland, police say
Man shot twice by postal worker returns to shooting scene on foot
Man charged in murder of dad of 7 over 'door ding,' sources say
Rain chance increases this weekend, fall front expected next week
FDA strikes cautious tone ahead of COVID vax booster meeting
Brian Laundrie's sister says she wants Gabby Petito to be found safe
2 wanted for carjacking family, threatening 10-year-old, HPD says
Show More
Father shot by stray bullet while asleep on his couch
2 separate freeways closures on US-59 happening this weekend
Man wanted for 9 ATM aggravated robberies in W. Houston
MS-13 leader gets life for murder of 16-year-old witness
Crews searching for Houston woman missing for nearly 2 weeks
More TOP STORIES News